A surgical procedure results in a small but significantly higher quality of life for women with painful uterine fibroids, NIHR-backed research found.

Myomectomy, which removes uterine fibroids, showed the benefit compared to uterine artery embolisation, which shrinks the fibroids by placing tiny beads into the blood vessels which supply them.

A fibroid is a non-cancerous growth of the womb which affects one in three women at some point in their life.  They most often occur in women aged 30 to 50 and develop more frequently in women of African-Caribbean family origin.

About half of sufferers experience significant symptoms that can include heavy menstrual bleeding, abdominal pain and bloating. Fibroids may also be associated with infertility and pregnancy problems, including miscarriage and preterm birth.

The results of the NIHR-funded FEMME trial was published in the The New England Journal of Medicine and led by researchers at the University of Oxford, St George’s Hospital London, and the universities of Birmingham and Glasgow.

A total 254 women were recruited from more than 29 UK hospitals, including 10 women from Oxford’s John Radcliffe Hospital.

The first patient group was women with an intention to conceive and the second group was made up of black women. They were randomly allocated a myomectomy or UAE procedure.

Rates of conception were shown to be broadly similar between the procedures. However, too few participants were trying to get pregnant to be able to determine with certainty whether there was an impact of either treatment on pregnancy rates, which was higher in the UAE group.

The University of Oxford’s Prof Klim McPherson, the study’s chief investigator, said: “These findings are important and reveal new evidence for our understanding of the best treatment for women with fibroids who wish to avoid a hysterectomy.

“It is worth noting that the myomectomy group reported only marginally higher quality of life score than the Uterine Artery Embolisation group, although on average women in both groups saw improvements.

“Interestingly, the perceived drawback associated with embolisation, that it might affect the working of the ovaries, was not supported by the evidence in this trial.”

Professor Andy Shennan, Professor of Obstetrics, and Clinical Director NIHR Clinical Research Network South London, said, “This work is a major contribution to knowledge on the management of the most common tumour in women of reproductive age.

“The researchers found a significant but small advantage for myomectomy in terms of quality of life, while observing slightly more pregnancies in the UAE arm, which provides wider treatment choices for women with symptomatic fibroids.” 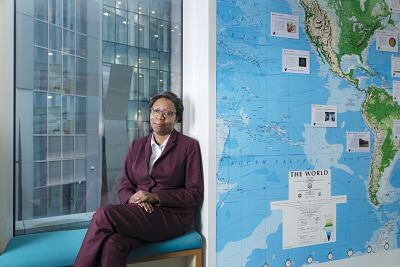