Case study: Mark Bennett – my experience of taking part in clinical research and why it is so important

Find out more about the National Patient Recruitment Centre in Leicester

Mark Bennett was on a late-phase commercial trial at Leicester’s Hospitals. 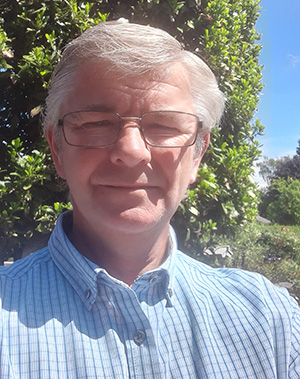 The trial was testing a new medication for ANCA-associated vasculitis, a rare genetic condition that causes inflammation of the blood vessels. The medicine, called ‘avacopan’ was tested to see how well it works when it replaces a steroid called prednisone. Prednisone is a common treatment for ANCA-associated vasculitis, but as a steroid it can have several side effects.

Mark explains his experience of taking part in clinical research and why research into conditions like his is important for future patients.

“Lots of little things were going wrong and it was getting worse: sinus infections, loss of hearing, coughing up blood and passing blood in my urine. After being admitted to hospital, I was diagnosed with vasculitis, which is a genetic condition where my antibodies attack my own blood cells. It mainly affects the kidneys. If it hadn’t been picked up when it did, my kidneys might have been permanently damaged.

“The main treatment for vasculitis is a type of chemotherapy, which seemed worse than the actual condition at the time, but I felt much better very quickly. I’m continuing with a chemo-based drug at the moment, my condition is stable and my kidneys seem OK.

“The doctors at Leicester’s Hospitals spoke to me about a trial to test a new treatment for vasculitis. It was made clear at the very beginning of the study that it was developed by a commercial company. The doctors went through a document explaining what they were trying to do, the risks and benefits, and they left it with me so I could have a good read before I signed up. It was very well explained; especially as this was the first time I’d been part of research.

“I took part because vasculitis affects only 1 in 50,000 people, and we don’t know enough about it. Research is needed so there is more knowledge about the disease and how to treat it. It’s a genetic condition: my mother may have had it - we don’t know for sure, but the symptoms she had before she died make it a possibility. I also have two sons and I’d like them to stay healthy.

“On a trial, you get lots of checking and are monitored more closely, so if something was to get worse with my health it would be picked up early.

“I would say to anybody thinking about taking part in research to do it. At the end of the day you are monitored much more closely than you would normally. If you’re having side-effects, they’ll check you over to be on the safe side, and take you off the medicine if necessary. If they can get a greater understanding of different diseases to keep people well it has to be a good thing.

“My main research doctor was very passionate to find a treatment to help her patients and the research nurses at the renal unit were absolutely fantastic.”